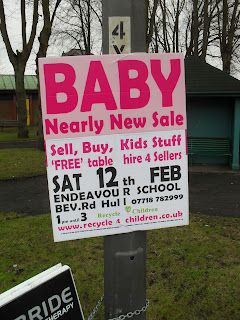 Mike Walker, who taught English at Brigg Grammar School in the 1960s and 1970s, really knew his stuff when it came to constructing a sentence. I was reminded of him this morning while walking past this sign close to the Tin Tabs and Brigg Monument.
Clearly this company is not offering a nearly new baby for sale. Yet that seems to be what it implies until you take in the smaller print further down the poster.
Mr Walker - nicknamed Dazzler because of his prominent forehead - once put all our class in detention for being late for one of his lessons. Actually, we were on time - but he had advanced the start by 10 minutes to coincide with the beginning of a BBC radio broadcast about poetry. We didn't think he had the power to pinch some of our break time. We were wrong - and at BGS there was no court of appeal, never mind one to consider the human rights of minors.
It took headmaster H B Williams a long time to read out the identities of all the detention-bound pupils in assembly - an early example of name and shame.
Mike's lessons on English comprehension, punctuation and syntax seemed very tedious at the time. But they proved very valuable in later life. Not that you'd have dared to start a sentence with a preposition in an English essay if it was going to be marked by Mr Walker.
But it's not. And that's all we have to say on the matter. So there!

And finally...a helpful rule-of-thumb for our good friend Ken to consider: It's acceptable for a sentence to begin with "but," like the conjunctive adverb "however." But try to keep it to a minimum.
Posted by NIGEL FISHER at Saturday, January 22, 2011

I was never very good with sintax, adverts and grammer and me handwriting goes all over the place!
And me typing skills gets me letters up-mixed.

And this guy, Willy Shakespeare became famous....I think he operated a Costa Coffee shop near Stratford, which is. I believe, where the 2012 Olympics are going to be.
But I could be wrong, Scribs...it could be in Scotland.....I know for sure it's not in Liverpool.

Basically, Nige, it's a car-boot sale specialising in children's wear.

Essentially, it needs an open space for stalls and parking....a group to organise it and to advertise the event.

There was a Sunday market on Hibaldstow airfield for a short period in the late 1970s or early 1980s which drew the crowds.

Okay, Scribs....that was the 80's!
We can learn a lesson from the one being advertised - see your pix - this is a school on the western outskirts of Hull......15 miles away + toll charges...but they still believe that they can attract some Briggy folk.

How much of a crowd would a regular SJN boot-sale attract? Pitch fees would go into the school coffers....or alternatively, the school offers parking and the boot-sale is on the Rec??!!.....money goes to improving the rec and school.

Then there's the specialist boot sales...for example, twice yearly at Carlton Towers near Selby there is a small boat and inflatable jumble....it attracts thousands.

Talking about inflatables,how about an Ann Summers boot sale, Nige?