Three councillors surveyed Brigg Conservation Area to point out which streets, structures and walkways need cleaning, tidying or general maintenance.
Coun Jackie Brock presented the findings, on behalf of herself and Couns Jane Kitching and Lesley Whitehand, pictured, the newest member of the Town Council, who has recently been co-opted (no election being requested by the general public after a vacancy arose).
The area looked at stretched from The Monument to the County Bridge and as far as the Millennium Green (Elwes Street/Cadney Road).
Weeds, graffiti and rubbish were highlighted - plus public seats, railings and a litter bin all in need of renovation. 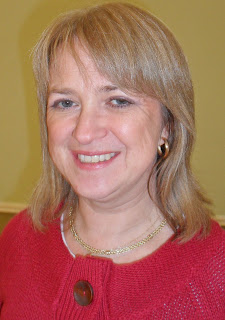 As she spoke at Monday's meeting of the planning and environment committee, Coun Brock held up sheets of photographs showing the areas in question. The three councillors were thanked for their hard work by Town Mayor, Coun Ben Nobbs.
The town council will now write to the various bodies, businesses and organisations deemed responsible.
NF adds: The councillors’ spot-check is similar to those carried out by Brigg Civic Society members. A couple of years ago, after this worthy organisation had ceased to function, I was invited (with camera) to join keen members Keith Nutting and Ian Smith on a similar tour of inspection of the town centre. I recall them being particularly concerned at the state of the metal railings on the County Bridge.
Posted by NIGEL FISHER at Friday, October 29, 2010