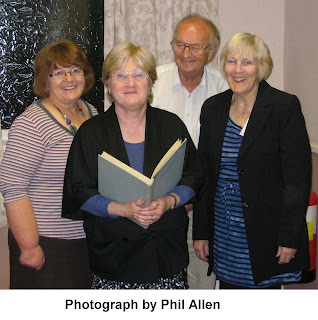 The 5th October 2010 BASH talk was a slide show “Edward and Mrs. Simpson” by Marilyn Roberts. Marilyn started by telling how Harold Wilson's government had originally intended the files on Edward & Mrs Simpson should remain hidden for 100 years, as they were felt to be so damaging. She said her talk would show the gradual change of Edward, over the years, from "beautiful boy" to "bitter old man,"
At this point in the talk Marilyn paused to suggest to the audience that early Christmas presents for the ladies might be in order, because some of the Duchess' jewels - reputedly worth up to £100 million - are going on sale at Sotheby’s in London in November.
She spoke of the early life of Edward including his time in the First World War. He left a lasting impression with the troops - partly because he was always so well turned out. The is because he didn’t live with the troops in the trenches but in a chateau up the road from the front.
Edward travelled the Commonwealth for several years but was soon bored. When he met Mrs Simpson he had been involved with a woman 17 years - and he dropped her almost instantly.
Wallace Simpson thought herself an aristocrat as she was from a southern family who had lost everything in the civil war. She married to escape Baltimore but, after 7 years, they divorced. She then married Ernest Simpson and came to London. She met Edward at Melton Mowbray and the relationship developed.
The arguments against the marriage to a twice-divorced woman were intense. He was to marry her anyway and had to abdicate in 1936. His brother "Bertie" became George VI and he became the Duke of Windsor.
In 1937 he toured Nazi Germany. During the War there were accusations that he held pro-Nazi sympathies and he was moved to the Bahamas as Governor. After the war they spent the remainder of their lives in retirement, both becoming increasingly bitter at their loss of position and status.

The next BASH meeting, on Tuesday, 2nd November (8pm) at the Brigg & District Servicemen’s Club, Coney Court, will be "The History of The Scunthorpe Telegraph" - a talk by Nigel Fisher. On Sunday, 31st October the BASH Halloween Ghost Walk takes place.

I think it should read Dr Marilyn Roberts - she has a PhD.
A most excellent talk.
Churchill indicated that if the Duke of Windsor ever returned to the UK, he should be tried for treason.
It is often argued that he had to abdicate because of his association
with a once divorced, still married woman......but nemerging evidence suggests that these aspects were not insurmountable, even in the conservative 1930's. Actually there is very little in the Constitution to deny his marriage.
It now seems that the main reason that the government were concerned was his association of all things Fascism - Oswald Mosley, Hitler, etc. The relationship gave the government an excuse to get rid of him.
Mrs Simpsom had a fascination with expensive jewellery...as the Prince of Wales he spent a vast fortune on her: as the Gov of Bahamas, Marilyn indicated he spent the years public budget for roads on sparklers.
As the Duke of Windsor, his income dropped considerably, but when they moved to France during the War, it seems that the inventory of expensive jewellery increase - where and how was he affording it?