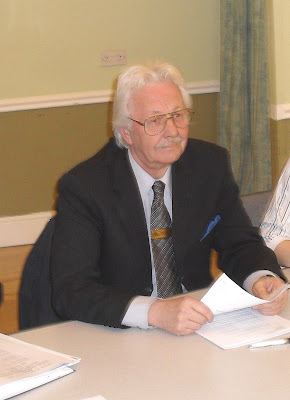 Coun John Berry (pictured), one of the Brigg area's representatives on North Lincolnshire Council, attended last night's special meeting of Brigg Town Council, in the Angel Suite, and put forward a suggestion on the Manley Garden fishing pond/public open space.
As the owner, North Lincolnshire Council is advertising the facility for sale and asking interested parties to make their bids. But Coun Berry is now suggesting that "going to auction" would be "a fairer way" of handling the sale.
Coun Berry stressed: "We don't know how much interest there is going to be and how much it is likely to fetch."
He explained that North Lincolnshire Council had disposed of assets before by auction.
Town Mayor Coun Ben Nobbs gave Coun Berry the opportunity to speak at the start of last night's meeting during the 15-minute session set aside for public questions.
Once he'd had his say, the Town Council considered the motion to exclude the press and public on the grounds of confidential business to be transacted. As expected, this was passed - meaning "yours truly" (and Coun Berry) had to depart.
Just to remind you, Brigg Syndicate Angling Club has been leasing the pond from successive local councils (Brigg UDC, Glanford Borough and North Lincs) for the best part of 40 years and, fearing for the future, it has approached Brigg Town Council for assistance/support. No club representatives were present at last night's meeting.
Brigg Blog has been out to take pictures of the pond, for the benefit of those who aren't familiar with its location or size. They'll be posted on Brigg Blog at a later date.
Whether Brigg Town Council takes up Coun Berry's idea and tries to persuade North Lincolnshire Council to alter the intended sale to a public auction remains to be seen.
Posted by NIGEL FISHER at Thursday, September 02, 2010

Can't see how auctioning the pond instead of seeking private tender will benefit anybody, Scribs.
It's still selling the pond - in a different form than originally planned.
The priority should be for management of the pond to be transferred to Brigg TC as a community amenity.
Consequently, the TC could pass clauses to safeguard the usage/access of the site.
Despite whatever conditions NLC imposes on the sale and future use, a private owner is more likely to perceive the acquisition as a money-making venture. For example, at one extreme, it is possible that the pond could eventually become a trout
pond and only attract the affluent angler.
The over-riding issue, however, is that MGP is within Brigg's integral infrastructure and NLC should be morally, if not legally, obligued to, at least, consult Brigg TC about its future.