WHEN 16 MEN GOT THE BOOT EVERY DAY

Our recent post on Bell's in the Market Place closing in 1983 has prompted further research into Brigg town centre businesses long ago - this time in Wrawby Street.
We'll wind the clock back a century to 1910 when Walter B. Robinson had an emporium selling newspapers, stationery and fancy goods. He later took over a printing business in Cressey Yard, one of the alleys off Wrawby Street, and when radio became a viable proposition opened a radio and gramaphone shop across the way in what's now Lloyds TSB.
The old post office was in Wrawby Street, adjoining College Yard. My grandad Charles Taylor (1896-1990) was a boy messenger there between about 1910 and the outbreak of the First World War, in which he fought and was wounded, becoming a sergeant. He worked as a coach-painter and signwriter for Layne's, in Bigby Street, into his mid-70s, and during the Second World War was in Brigg's Home Guard.
But back to Wrawby Street a century ago...Near to the post office (on the other side of College Yard) was a jewellery and silversmith shop owned by Percy Cross, later being taken on by Winter Jackson.
Next door - and still in business today, of course - came the Black Bull. Circa 1910 there were three other pubs in that stretch of Wrawby Street - the Red Lion, Butcher's Arms and the Rose and Crown. The Red Lion was demolished to make way for a chemist's; the Butcher's became a betting shop (today, the Deli); while the Rose and Crown became a baker's.
Further down the street was ironmonger J H Elwood, later operated under the same name by Ewart Gillard.
Among the best-known on the other side of Wrawby Street was Walker's - a century ago owned by Sidney E Walker, the business having been registered way back in 1844. His first shop was in the premises much later owned by butchery firm Watson's, subsequently moving to the site known to many as Lloyds Bank, then into Wrawby Street. In the late 19th century, Walker's employed 16 men making boots and shoes. Later, of course, the firm occupied a prominent position in Wrawby Street, the business being run by grandson Sidney and his wife Hilda.
A century ago, George Van Eccles had a sizeable men's outfitting shop running the width of a block with rear entrance from Bigby Street. The site became derelict when the business closed and it was some time before the area was cleared.
Nearby was a drapery business owned by the Patchett family - a mother and sons partnership.
In the Market Place the Angel Hotel's successive landlords were Joseph Hellaby Skevington and Bill Bridgwater. The Angel operated a horse-drawn bus to take guests to and from Brigg station - then receiving a proper, seven-days-a-week service from the Manchester, Sheffield and Lincolnshire Railway mainline (subsequently the Great Central, then the London North Eastern 1923-47).
Our pictures give a taste of what Wrawby Street was like circa 1910. Brigg Blog welcomes your memories, or information, on town centre shops of the past. Please post a comment on this story or email scoopfisher@aol

You can read my Nostalgia page in the Scunthorpe Telegraph every Monday and more about Brigg life long ago in Nostalgia magazine, on sale every month for 75p. The February issue is in the shops next Friday (Feb 26) and costs 75p. It includes a special feature about Winnie Cammack, ex-Richardson's newsagent, Wrawby Street, plus more Brigg memories. 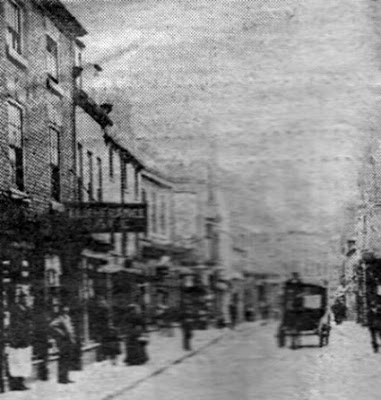