BRIGG WILL CROWN ITS JUBILEE QUEEN 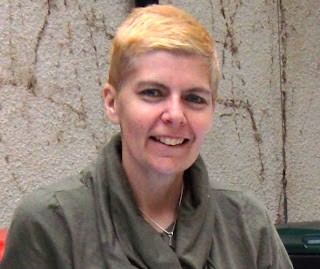 About 30 people turned out for Wednesday night's Brigg Jubilee Committee meeting to continue with plans to celebrate the Queen's Diamond Jubilee on bank holiday Monday, June 4.
It was another heartening turn-out in the Angel Suite, although not quite as large as for the initial public meeting earlier in the month.
The plan is to have events in the Market Place in the morning, then hold a parade through the town centre, round The Monument and down Wrawby Road to the Recreation Ground, where further community events will be stated.
Here are a few of the items mentioned, considered and/or decided at Wednesday's meeting, taken from the minutes issued by Coun Sheila Boughey (PICTURED ABOVE), the committee's secretary:

MARKET PLACE
Brigg Spring Clean is scheduled for the week prior to the Jubilee Celebrations so it is hoped the town centre will be relatively litter free.
Coun Ben Nobbs has booked the bandstand and is in the process of booking the Market Place through the Highways Agency.
Because of health and safety concerns over erecting a solid structure to act as a banner over the County Bridge, Sheila Boughey has suggested having an arch of red, white and blue balloons attached to either side of the bridge with a banner going across with The Diamond Jubilee printed. Sheila  will be researching costs and reporting back to committee.
Barry Gray has been contracted to erect bunting in the town centre and is in consultation with the shops/businesses regarding flags in the posts normally used for Christmas Trees.
Suggestions were made that the Tourist Information Centre could fly a flag as well as decorating the Angel Balcony. Jane, from Jaylaurs, has kindly volunteered to organise the balcony decoration.
Gordon, of Gordon's Cards, had made note that he was already finding it difficult obtaining flags. It was suggested that we may need to look online, probably EBay for suppliers.
A best dressed window competition is suggested for all the shops.
The Methodist church is planning on decorating the church with bunting and messages to tie in with the celebrations.
Ben Nobbs suggested the use of a farm trailer as a stage as hiring the stage normally used is very expensive. Anne Spolton had some ideas of who we could contact as they have used them in the past and will be emailing the details to Sheila Boughey.
The trailer will be centrally sited in the Market Place so picnickers can form an arch around the stage.
Ben Nobbs will consult with businesses regarding "no through traffic" during the picnic and parade and if deemed necessary request a road closure for the times needed.
Questions were asked regarding the provision of chairs and tables for picnickers. Also, if tables were to be provided the possible purchase of Jubilee themed tablecloths.
The location for the Women's Institute and Mothers Union cream teas is still in question.
The Angel Courtyard may be an option but with the planned Library/Heritage centre work being carried out around that time it may not be available. It was suggested that maybe the WI/Mothers' Union may be able to serve cream teas in the afternoon at the Recreational Ground and the Church serve in the morning in the Church Hall.
A water boiler will be needed for use by the WI/Mothers' Union and the representatives from The Scouts and Guides felt they may be able to help.
First aid will be needed. Anne Eardley passed the St John Ambulance details to Sheila Boughey who will contact them regarding covering the celebrations and costs and report back to the committee.
It was also suggested contacting Chris Darlington of L.I.V.E.S. and asking if they would like to be involved.
Ben Nobbs is looking into the need for a PPL Performing Rights Licence.
The Women's Institute and Mothers' Union have all relevant Health and Hygiene certificates in place for their plans to serve cream teas.
Volunteers will be needed for the clearing of any litter after the picnic. Paul Edworthy, of the Foundry Church, kindly offered help from his parishioners to help with litter collection, and Ben Nobbs will arrange any collection of litter bags needed with North Lincs Council.
Ben Nobbs will be consulting with Market Place traders regarding the picnic and any issues that may arise.
The issue of communication between stewards and organisers on the day was raised, with either walkie-talkies or mobile phones suggested.
High visibility jackets would be needed and Ben Nobbs suggested we use the Brigg Town Councils jackets that are used during the Spring clean.

PARADE
Suggested that the Mayor and Lady Mayoress travel in an open top car.
Also taking part in the parade a Jubilee Queen and two young attendants in a horse-drawn carriage. The Jubilee Queen will be aged 18 upwards with younger attendants. The selection of the Queen and attendants must be an open selection and it is hoped that a group may take on this role.
Music for the parade to be supplied by the cadet band along with cadets marching and carrying the Union Jack flag.
Batons of steel cheerleaders.
Scouts and Guides
Koko Ryu Karate club as well as any other organisations/groups who may like to be involved.
Also decorated prams/bikes as well as children in fancy dress, accompanied by parents.
It was suggested by Jane Kitching that during previous Jubilee celebrations the National Anthem was played. It was felt this could be made a part of the town Mayors welcoming address to the celebrations.
Anne Eardley also suggested Bell Ringing.
Ben Nobbs has been in talks with the police and although many staff will be on leave for the bank holiday they are very happy to offer support in the form of special constables who will work with any police officers who are working that day.
A parade Marshall will be needed and Graham Slater has offered to consult with his warrant officer on this matter.

RECREATION GROUND
Ben Nobbs has booked the recreational ground and is just awaiting final confirmation.
Coun Rob Waltham has promised there will be no charge for the use of the recreational ground.
The top field has been suggested for parking with the possibility of using the car park at Nelthorpe school for overspill parking.
The Explorer scouts have very kindly offered their services as parking stewards.
Coun Rob Waltham has agreed to look into waiving parking costs in the Old Courts car park for the day of the celebrations, at the request of the committee. He will report back at the next meeting.
Signage will be needed two weeks prior to the event to warn car users of the parade and how it may effect them if they wish to travel through Brigg at the time of the parade. Also clear signs needed directing traffic to the car parking areas at the Recreational ground.
PA System and Continuity needed. Rachel Day was suggested and this will be looked into.
A large marquee has been booked for the serving of refreshments as well as any static displays. Timings needed on how long will take to erect so hopefully can be erected on the day with no need for overnight security.
Enquiries will need to be made regarding the opening of the toilet facilities on Cary Lane and at the Monument for the bank holiday.
Refreshments for the recreational ground
Stennetts market vendor
Sargents Ice cream
Others to be researched and suggested
Paul Edworthy, of  The Foundry Church, kindly offered the purchase and free distribution of bottled water to attendees to the celebrations and participants of the parade as and when the need arose.

EVENTS AND ACTIVITIES
It was agreed that all interested groups would email Sheila Boughey with their plans for activities.
It was suggested that the fancy dress competition should be judged in the morning while the children's costumes were fresh.
Anne Eardley suggested sending leaflets to the schools to distribute to their students to notify them and their parents of the Fancy Dress competition.

CHURCH SERVICE OF THANKSGIVING
The suggestion was made to approach Father Dominic regarding the use of The Catholic Church as a venue for a service of Thanksgiving. Subject to discussion it is hoped a service will take place at a time to be decided on the Sunday the 3rd January, the day before the proposed Jubilee celebrations.

THE BEACON
Couns Carl Sherwood and  Rob Waltham have taken responsibility for organising the beacon and will report back at the next meeting.

OAK TREE
Anne Spolton reported that Sandringham Estate has grown oak trees specifically for the Jubilee Celebrations and are offering them free of charge to applicants who may wish to plant them within their town centre to commemorate the Jubilee.

FUNDING
Ben Nobbs reported that following the Full Town Council meeting held this past Monday, money has been set aside for funding of the Jubilee celebrations to the sum of £2000.
Coun Waltham also said there may be grants for further funding that can be applied for via North Lincolnshire Council and perhaps North Lincs Homes.
It was suggested that we might consider the purchase of a memento for each child in Brigg to celebrate the Jubilee. Ben Nobbs reported that this was mentioned at a recent ERNLCA meeting he had attended and a parish council of a local small village had purchased mugs for each child which had cost in the region of £3000. Ben will ask the town clerk Jeanette Woollard about costs for previous mugs bought for the millennium.

READ MORE AND VIEW A PATRIOTIC PICTURE THROUGH THIS LINK
http://www.briggpeople.co.uk/Brigg-Diamond-Jubilee-Celebrations-Committee/story-15052835-detail/story.html