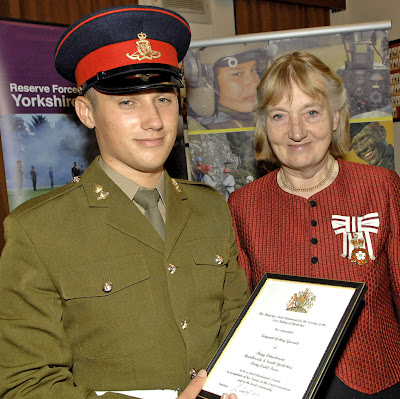 A talented teenage cadet, Ashley Garratt, from Brigg, has been awarded the prestigious appointment of Lord-Lieutenant’s Cadet – an achievement recognised as the highest honour in the Cadets – in recognition of his outstanding service in the Army Cadet Force (ACF).
The certificate was presented to 17-year-old Ashley by The Hon Mrs Susan Cunliffe-Lister, Lord-Lieutenant for East Yorkshire, at a ceremony held at the Cadet Training Centre at Driffield Camp (Brigg being included with that area).
The accolade means Ashley now holds the position of Lord Lieutenant’s Cadet for East Riding of Yorkshire.
Described as a very pleasant and quietly unassuming cadet, Ashley has demonstrated excellent leadership skills throughout his four years with the Brigg detachment of the ACF, and is a very well-respected member of his Company.
One of only a few cadets to be selected for a special Tri-service expedition to the Himalayas last year, Ashley is also a keen sportsman and achieved the position of National Champion in Cadet Athletics and is a regular player for his local football team.
He is currently studying for his Gold Duke of Edinburgh’s Award and continues to be an active member in the community, always willing to assist with events, and fundraising for charities such as the Royal British Legion in Brigg.
Reflecting on the ceremony and his new role as ambassador for the cadets in East Riding of Yorkshire, Ashley said: “Receiving such a prestigious award is a great honour, and I’d like to thank all those who have supported my career in the cadets and helped me reach such a position.
“I enjoy my life in the cadets enormously and have had experiences and opportunities that very few of my age have. It is a great privilege to continue my cadet career as the Lord Lieutenant’s Cadet.”
Lieutenant Colonel Jeremy Bleasdale, Deputy Chief Executive of the Reserve Forces’ and Cadets’ Association (RFCA) in Yorkshire and the Humber commented: “The Lord Lieutenant’s Certificate is a prestigious award that recognises cadets who have performed above expectations. I’m delighted for Ashley, who is a shining example of what can be achieved when young people involve themselves in extra-curricular activities.”
Colonel Bleasdale also appealed for more adult volunteers to support the region’s 5,400 cadets.
He said: “The cadet movement is one of the most prestigious youth organisations in the world, and its popularity means we need more adult instructors to lead the cadets and deliver the quality of experiences, adventure and community projects which our cadets enjoy. We would love to hear from people who are willing to offer their time and enthusiasm to join our ranks as an Adult Instructor – no military experience is needed.”
Ashley was one of only eight cadets – selected from a total of 5,400 cadets across the whole Yorkshire and Humber region – to be awarded the Lord Lieutenant’s Certificate, which is presented as a mounted scroll. All cadets are between 10 and 18 years-old and can be part of the Sea Cadet Corps, Army Cadet Force or Air Training Corps.
For more information about the cadet movement or to enquire about becoming an adult volunteer visit the Reserve Forces’ & Cadets’ Association website at: www.rfca-yorkshire.org.uk.
Brigg Town Council was informed of Ashley’s achievement at its latest meeting. At the suggestion of Town Mayor, Coun John Kitwood, it was agreed to pass on the authority’s heartiest congratulations.

BRIGG BLOG'S THANKS ARE EXTENDED TO PAUL BARNARD FOR SUPPLYING THE INFORMATION AND PHOTO.

“YOURS TRULY” IS THE COMMUNITY PUBLISHER. YOU CAN REGISTER WITH THE SITE AND THEN UPLOAD YOUR OWN NEWS, SPORT AND VIEWS.
Posted by NIGEL FISHER at Tuesday, November 01, 2011