SOMEWHERE OVER THE RAINBOW x 2 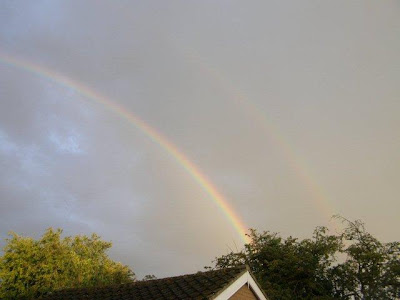 A rare double rainbow over Brigg the other night, captured by Brigg Blog follower Alec Depledge.

“YOURS TRULY” IS THE COMMUNITY PUBLISHER. YOU CAN REGISTER WITH THE SITE AND THEN UPLOAD YOUR OWN NEWS, SPORT AND VIEWS.
Posted by NIGEL FISHER at Friday, July 01, 2011

Meteorologically speaking, Scribs, rainbows are always double....But in most cases the second rainbow is so faint that it goes unnoticed.
In an example where the 2nd rainbow is seen, the lower rainbow is the brighter, primary rainbow, while the optical spectrum of the usually fainter upper, secondary rainbow has its colours revered.
For example, Richard Of York Gave Battle In Vain....becomes Vain In Battle Gave York Of Richard !!

Looked like the Pot of Gold at the end of the rainbow was situated somewhere over Cadney, Ken!

It's all relative, Scribs...as one moves forward, the rainbow, so to speak, moves backwards.
One cannot actually get to the end of a rainbow; when I was 10, I went on a school trip to Eire...early in the morning with the Sun behind us in the west, we (2 young scallies) were standing at the stern of the over-night ferry. There had been an early morning shower as we approached Dublin Bay...and one end of the rainbow appeared to directly over the bow (pointed, front end).
We raced along the deck and when we got to the bow...the rainbow's end was now some way off in front of the boat.
But our mates at the stern were convinced that we had been to the end of the rainbow.
Their perception was reinforced by Mr 'Good Old' Wilson telling us kids about leprechauns and Irish magic on the steam train from Dublin to the children's holiday camp at Bray.