BRIGG RESIDENTS 'NEED TO BE CONSULTED' 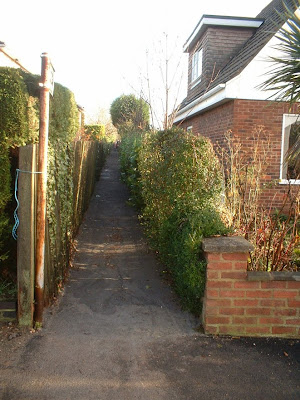 The future of a Brigg public footpath, which is under threat of possible closure, should be considered very carefully before any action is taken, town councillors believe.
North Lincolnshire Council – responsible for maintaining Public Footpath 283 to the rear of St James’ Road - is sounding out town councillors’ views before sitting down to make a definite decision.
There is concern about “the ongoing burden of maintenance” of the public right of way, with damaged fencing needing regular attention.
But town councillors want to know what interested members of the public think.
Coun Mike Campion told the town council’s monthly meeting: “I would not really want to make a decision on this before local people have been consulted.”
Coun Ben Nobbs suggested the public footpath was “well walked.”
Coun Ann Eardley recalled that when closure of the path had been suggested years earlier, Brigg Town Council had made strong objections and the walkway had remained open.
Coun Rob Waltham suggested North Lincolnshire Council should be told that Brigg councillors wanted to know the views of local residents before considering the issue further.
That course of action was agreed.
Brigg’s voluntary Footpath Warden, Tony Parker, has been made aware that closure is a possible option for what is known locally as Clothes Hedge Footpath, linking St Helen’s Road with Churchill Avenue. He has outlined his views and suggestions to town councillors, for which they have expressed their appreciation.

“YOURS TRULY” IS THE COMMUNITY PUBLISHER. YOU CAN REGISTER WITH THE SITE AND THEN UPLOAD YOUR OWN NEWS, SPORT AND VIEWS.
Posted by NIGEL FISHER at Friday, July 01, 2011

The public footpath was there long before the houses.
It things like public footpaths that give an area it's idiosyncratic nature.
The path, itself is easily walkable, 'cept the hedges are a little overgrown.
The posts in the wooden fence area are rotten at their bases, but they seem original - about 30/40 years old - couldn't see any evidence that the fence had received the 'regular' maintenance, as claimed.
One should initially establish who is responsible for the paths boundaries - it should be in the deeds - is it NLC of the householders whose gardens border the path?
And who are these 'local residents' who are to be consulted?
An established public footpath encompasses everybody, from the little old lady in Wrawby, to the hiker from Barnsley who just happens to walk the route, not just householders who happen to live nearby.
Local residence have no more rights to view their opinions about the public footpath than anyone else - it was there long before they arrived and they should been aware of its existence before they purchased a house bordering the path.
Indeed, so-called 'local opinion' could be completely skewed: for example, how many will be tempted to condemn the path to selfishly gain extra garden space?
KEEP THE PATH OPEN - USE COMMUNITY 'PAY-BACK' SERVICE TEAMS TO MAINTAIN THE PATH....To close it will be just another snip at casually losing local heritage.