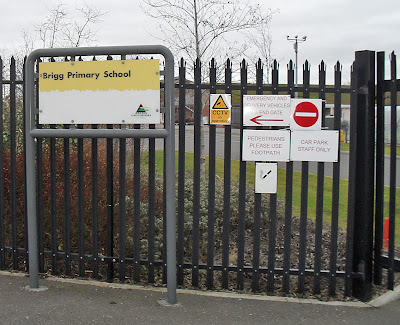 Efforts are being stepped up to improve the safety of pedestrians – parents and pupils - outside Brigg Primary School, on Atherton Way.
Brigg Town Council debated the following proposal from concerned Coun Sheila Boughey at its monthly meeting in the Angel Suite:
In the interests of pedestrian safety, and in consideration of the fact that Atherton Way is now both a vehicular and pedestrian route to Brigg Primary School, Brigg Town Council should make strong representations to North Lincolnshire Council regarding the formal adoption of Atherton Way, and request that the following additional highway safety measures should also be put in place:

A crossing patrol
A 20mph speed restriction
School sinage
Additional signage to direct lorries not to enter the northern spur of Atherton Way that leads to the school only.

Fellow councillors agreed with the thrust of Coun Boughey’s proposals, although there was some discussion about the exact wording of the missive to be fired off to North Lincolnshire Council, which is both the highway and the education authority.
Should it be a question of Brigg Town Council supporting existing efforts being made by the school governors? Or should Brigg Town Council be making its own direct call for action?
Coun Boughey suggested Brigg Primary School was “uniquely sited” – in that the powers-that-be had decided to put it at the furthest extent of a busy industrial estate.
“Lorries are going through and cars are going back and forth,” she explained. “At school pick-up and drop off times it’s a nightmare!”
Coun Boughey said the message should be clear: North Lincolnshire Council chose to put the school there “so let’s do something about it.”
She demanded: “It is really going to take a child to be killed before it is sorted?”
Coun Mel Oades suggested asking the school governors what support they might require from Brigg Town Council.
And Coun Rob Waltham felt Brigg Town Council’s approach should be “to support the governing body in its efforts”.
Posted by NIGEL FISHER at Monday, July 11, 2011

One suggestion that emerged during a Brigg Community-Led Plan meeting was that the footpath/footway from Grammar School Road to the school should be improved.
The idea was that this would encourage parents and children from this area of Brigg to walk to school, in preference to taking children by car.
Personally, I don't know the route, but there was some suggestion that a rear gate to the school is sometimes locked.
If the information is accurate, then there seems to be some creditability in exploring this notion.