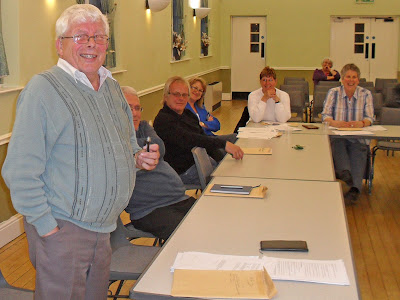 The first Freeman of Brigg has been apppointed - former long-serving councillor Tom Glossop.
The honour has been bestowed on him by the Town Council, from which he retired in May after more than three decades of dedicated public service.
The Council announced last night, in an official proclamation:

“By virtue of section 249(5)(6) of the Local Government Act 1972, as amended by s27 of the Local Democracy, Economic Development and Construction Act 2009 (the 2009 Act); the title of ‘Honorary Freeman of Brigg’ should be conferred upon Mr. Thomas David Glossop, of ‘Sandcrest’, 50, St. Helens Road, Brigg, in recognition of his outstanding and un-interrupted service to Local Government and the Town of Brigg throughout the past 32 years as a member of Brigg Town Council; and also in recognition of his tireless support for charitable events and organisations in the Town, which has benefited the Town and its residents and also served to generate a positive profile of Brigg, both locally and nationally.
Accordingly, Mr. Glossop has been invited to attend the Town Mayor’s Civic Service and reception, which will be held at 4pm on Sunday 9th October 2011, at St. John the Evangelist Church, Brigg, when the Town Mayor will make the formal presentation at the reception which follows the service, at the Angel Suite.
In addition to the title, the Town Council also determined that, from hereon:

• Mr. Glossop will be invited to attend all of the council’s Civic Functions, together with a guest, at the Town Council’s expense.

• At those Civic Functions where a formal Civic Procession occurs, Mr. Glossop and his wife will be entitled to process with the Town Mayor and Mayoress.

It should, however, be noted that the title of Honorary Freeman is not a hereditary title and, therefore, the title and its entitlements can not be bequeathed or passed on.

OUR PICTURE ABOVE SHOWS TOM MAKING HIS LAST SPEECH AS A COUNCILLOR.BELOW, HE'S SEEN CHAIRING A MEETING OF THE BRIGG COMMUNITY-LED PLAN GROUP IN THE ANGEL SUITE LOUNGE.

“YOURS TRULY” IS THE COMMUNITY PUBLISHER. YOU CAN REGISTER WITH THE SITE AND THEN UPLOAD YOUR OWN NEWS, SPORT AND VIEWS.
Posted by NIGEL FISHER at Thursday, July 14, 2011