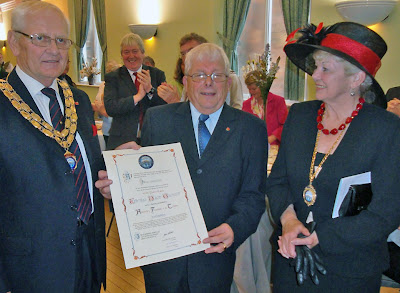 
Most people in Brigg knew Tom Glossop was being made the town’s very first Freeman, the high honour being announced during the summer.
But the actual ceremony to officially present the scroll was arranged to coincide with the Brigg Town Council Civic Service, held on Sunday.
Civic guests from northern Lincolnshire and the East Ridings, including many Town Mayors, Mayoresses and Consorts, were able to accept the invitation to attend.
There was a reception in the Angel Suite lounge before the VIPs, including the Mayor of North Lincolnshire, Coun Keith Vickers, of Barton, processed down Exchange Place and Wrawby Street.
They were led by Brigg Town Mayor, Coun John Kitwood, and the Mayoress, Kathryn Kitwood.
At the Wrawby Street entrance to the church they were greeted by the Vicar of Brigg, Father Owain Mitchell, and Brigg’s Deputy Town Mayor, Coun Carl Sherwood.
The Town Mayor’s Chaplain, Coun the Rev Alec Depledge, presided at the service, which, in addition to hymns and lessons, featured musical items from the choristers of Brigg Primary School and Natasha Jeffrey, of The Vale Academy.
Afterwards, refreshments were served in the main room at the Angel Suite, which was laid out in very impressive style for the occasion under the watchful eye of Angel Suite manager Karen Deeley.
The Town Mayor had the honour of presenting Tom Glossop, of St Helen’s Road, the retired Brigg youth leader, with the scroll for his new role as Honorary Freeman of Brigg.
A standing ovation followed from the guests, after which ex-Yorkshire miner Tom looked back happily on his 32 years’ service as a town councillor, which ended in May when he decided to retire.
However, his community service in Brigg is not over.
He still has connections with a number of organisations in the town and will continue to work on a group developing the River Ancholme and on the committee bringing together the first Brigg Community-Led Plan, which will show how townsfolk wish to see the town develop in the future. 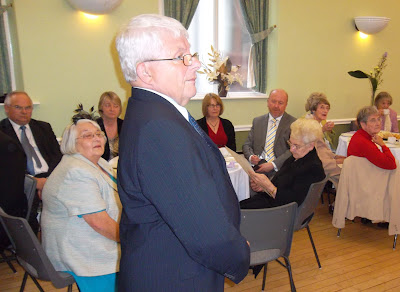 Tom Glossop looking back on his service to Brigg during Sunday's ceremony in the Angel Suite. On the left is Tom's wife, Maureen (also a former councillor and former Town Mayor). 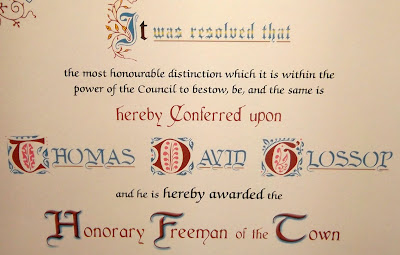 A close-up of part of the scroll presented to Brigg's first Honorary Freeman. 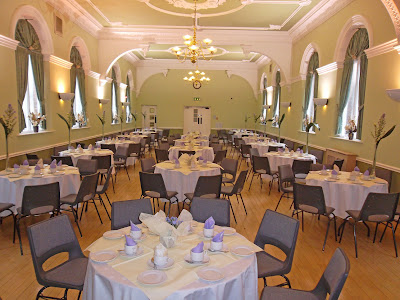 Looking an absolute picture...The Angel Suite on Sunday afternoon, awaiting the guests from the Civic Service. This room is available for hire through the Town Council for events ranging from meetings to weddings and Christenings. For details, email enquiries@briggmarkettown.co.uk

PROGRESSING TO THE CHURCH AND TAKING REFRESHMENTS
http://www.briggpeople.co.uk/pictures/Freeman-Brigg-s-Tom-supports-community/pictures-13546811-detail/pictures.html

“YOURS TRULY” IS THE COMMUNITY PUBLISHER. YOU CAN REGISTER WITH THE SITE AND THEN UPLOAD YOUR OWN NEWS, SPORT AND VIEWS.
Posted by NIGEL FISHER at Thursday, October 13, 2011