BROTHER OF ALL PROBLEMS! 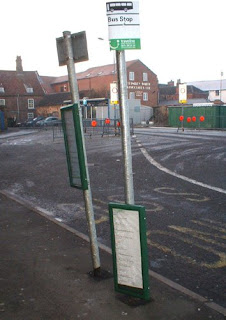 Only tiny actor Verne, from current hit TV show Big Brother, could cope with the newly re-hung bus timetable in Cary Lane, Brigg.
The glass-fronted cabinet, containing the timetable information, became detached from its fitting and was propped up against the metal pole.
Now someone in authority has sent a worker down to re-hang the cabinet...but it's only a couple of inches above the footpath (right of picture).Anyone above Verne's height - remember him as Mini Me in the Mike Powers movie? - has to get down on their knees to have a hope of finding out the time of the next bus to Sunny Scunny.
A simple thing like providing a readable timetable seems to be impossible in Cary Lane.
First we had what I laughingly refer to as The Tardis - a top-of-the-range computer-controlled console allowing passengers to access all sorts of transport information.
The trouble was it only worked for a few weeks and was eventually spirited away, with no promise it would return. Just like Doctor Who, really!
Once the Tardis left Planet Brigg, there was a long gap with no passenger information available at all until eventually the two old-fashioned display cases (pictured) appeared on the scene.
If actor Verne ever turns up in Brigg, he'll obviously be impressed by the positioning of the timetable. But maybe someone can explain exactly why it's resting only a couple of inches off the ground.
My first thought was it had been re-hung at the proper height, then maybe pushed down the pole by some joker. However, the glass-fronted case seems to be very firmly fastened to the pole, in its current position, by two metal clips.
Watch out for the next instalment in what could run over several weeks, just like a series of Doctor Who!
Posted by NIGEL FISHER at Thursday, January 15, 2009

Nigel youve missed the obvious connection between Brigg and Buses . Judging from the comments about the sad closure of the White Horse several Scunthorpe drinkers claimed Brigg had more than its fair share of PHs or more delicately put heavy drinkers.
The bus company must have taken their comments on board and positioned the timetable at a covienient height for anyone laid in the gutter slightly enebriated to find out the time of the next bus to Scunthorpe .

By the way talking of pubs in Brigg there used to be 17 pubs and bars on the old Brigg pubcrawl could any bloggers name them ?. I think I can .