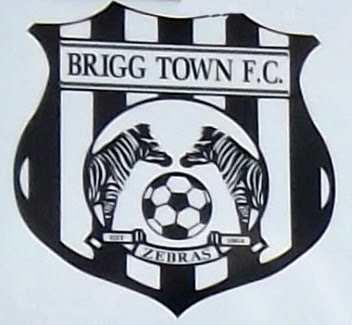 Brigg secured all three points with two late goals from substitute Eliot Broughton after the visitors had dominated the play for the first hour of the game and missed enough chances to win comfortably With Ollie Fisher unavailable, William Peers returned after a lengthy injury  lay- off to start the game in the back line  and after a slow start, he gradually re-gained in confidence to control the attacking danger of Paolo Piliero on the visitors’ left wing..
The visitors started the game confidently and after five minutes, Paolo Piliero's cross from the left found Robert Spencer  striking a shot against the cross bar, rebounding to safety. Brigg responded with an attack down the left wing but Phil Jackman was unable to get any power into his over-head shot in front of goal, allowing Mats Morch to pick the ball up easily. Then with a slick  Gresley movement down the right wing, Robert Spencer played the ball in for Eric Graves to hit a fierce shot over the top of Jake Turner’s  goal. Scott Hellewell had to concede a corner kick on the left. Jack Langston’s cross was played  too deep but was knocked back into the penalty area for Paolo Piliero to fire into the side netting. Paul Grimes was being closely marked with little protection from the officials but found space to set up a chance for the hard working Paul Ashton to deliver a cross along the face of the Gresley goal. Then from a free kick, Mats Morch had to make a late save low down at the foot of his upright post. Danny Buttle started to get more possession and slipped the ball forward for Liam Dickens to strike a shot over the bar from twenty yards out. When Gresley counter-attacked with pace down the right wing, a flowing move between Matthew Roome and Eric Graves ended with Robert Spencer wildly firing another shot over Jake Turner’s goal. The opening  goal came after twenty five minutes of play from a quick break down the middle of the pitch with Paolo Piliero laying the ball off  with some fortune through William Peers’ legs to LUCAS HARRISON  on the left wing to beat Jake Turner with a shot into the far bottom corner of the net.
This  goal started a period of dominance by the away team up to half time to create clear openings to increase the lead. Jack Langston struck another shot wide of the upright and one from Kieran O'Connell was deflected off William Peers for a corner kick. From the corner kick, Jack Langston took a return pass from Paolo Piliero to hit a fierce shot at goal,  which Jake Turner tipped over the cross bar. Robert  Spencer’s shot from Alex Steadman’s lay- off struck the cross bar again after a purple patch of attacking play by Gresley and as half time approached, Paolo Piliero struck another shot wide from a good position on the left but leaving the visitors just a single goal ahead at the break..
The second half began with a free kick awarded to Gresley being played into  the goal area by Jack Langston but comfortably held by Jake Turner. Brigg began to win much more of the ball and Danny Buttle created their first real opportunity when he went past his marker on the left wing and delivered a telling cross along the face of the goal but there was no touch available to finish off the move. Anthony Bowsley and Jordan Thewliss replaced Danny Buttle and Phil Jackman ten minutes into the half and signs of weakness in the Gresley defence became apparent as goalkeeper Mats Morch flapped away a high cross but at the other end, Jake Turner had to be alert to race out to clear on two separate occasions. Midway through the half, Paul Ashton struck a dipping shot, which struck the top of Mats Morch’s cross bar. Brigg suddenly began to look more threatening as Eliot Broughton replaced Liam Dickens fifteen minutes from time. Paul Grimes was constantly tackled from behind but still got free to send a fierce drive over the cross bar. Then after eighty five minutes of play, Brigg were at last awarded a free kick in a central position twenty- eight yards from goal. Paul Grimes struck a low shot against the defensive wall but the ball broke free to the alert ELIOT BROUGHTON , who beat Mats Morch with a low drive into the corner of the net.
Brigg were naturally spurred on by this success and suddenly looked capable of getting something from the game. As the match moved into added time, a Gresley attack on the Brigg goal was cleared and the ball played up the pitch down the left wing for ELIOT BROUGHTON to outpace the visitors’ sluggish defence and race on to send a great shot into the far corner of the net with Mats Morch well beaten. The timing could not have been better with the final whistle blown shortly afterwards.
BRIGG TOWN:  Turner, Peers, Matthews, Dickens, Hellewell, Jacklin, Ashton, Zuerner, Grimes, Jackman, Buttle. Substitutes;  Broughton (77), Bowsley (52) and Thewlis (52) for Dickens, Buttle and Jackman(Forrester and Zand  not  used).
Attendance:   105.
Brigg travel to play at Lincoln United on Boxing Day afternoon and then follow this up with a long journey to Sutton Coldfield next Saturday.
Posted by NIGEL FISHER at Sunday, December 22, 2013