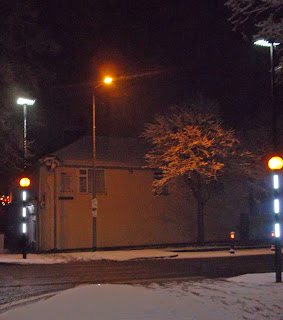 Brigg Blog recently made reference to the tall lights on towers above the newly-refurbished zebra crossing on Bigby Street. The lights appear to be directed to illuminate the orange Belisha beacons beneath and their surrounds.
As we think these after-dark images demonstrate, these tall towers are certainly effective in that regard; drivers approaching from The Monument  roundabout, or from the Cadney direction, are left in no doubt that they are coming up to a Zebra.
What we would like to know, for the sake of curiosity, is whether these lights are a requirement of some higher order than North Lincolnshire Council, the local highway authority? Is there some government, or even European Union, directive controlling such installations?
Illuminating a zebra crossing like we see here in Bigby Street must involve a good deal of upfront investment.
But we assume the lights are of the LED variety, so less "juice" will be required, which is welcome.
You may well know this: Belisha Beacons are named after Leslie Hore-Belisha, Minister of Transport when they were introduced as part of UK road safety measures in the 1930s. He was later made Baron Hore-Belisha - a wonderfully sounding title, if ever there was one. 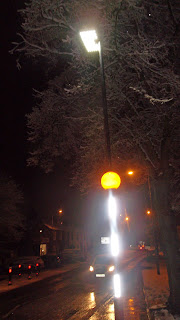 H-B also introduced the 30mph speed limit in built-up areas.
During his tenureship as the Minister of Transport, he re-wrote the Highway Code to form the basis we know today.