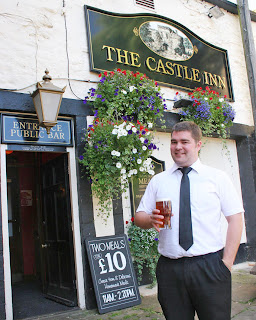 Brigg Blog loves to report the achievements of people who grew up in our town, or who were educated here, and have since moved elsewhere and found success in their chosen sport, profession or community.
Calvin Dow has been hitting the headlines in the licensed trade.
Many Brigg folk will remember Calvin from his Brigg days and recognise him from these pictures.
A good number of our followers will know of his strong family connections with our own Britannia Inn on Wrawby Street.
Aged just 26, Calvin, of The Castle Inn in Skipton, Yorkshire, has been recognised as one of the best licensees in the country, in Star Pub & Bars’ national awards.
Calvin received the award from Jeff Stelling - presenter of Sky TV's Soccer Saturday - at the Star Pubs Awards gala dinner, which celebrated licensees’ achievement in creating exceptional pubs.
It was the culmination of a judging process involving pubs from all around the country over many months.  In Calvin’s category, the judges were looking for someone who demonstrated vision and leadership which they felt he had in abundance.
He took on the Castle Inn in 2010 when he was only 23, making him the youngest landlord in Skipton,   He immediately recognised its potential.  By focussing on what customers want, offering great beer, traditional food and outstanding customer service in a friendly atmosphere he has turned what was once a rundown drinkers’ pub into a thriving town centre pub at the heart of the community enjoyed by regulars and visitors alike.
One of Calvin’s main achievements has been introducing food.  When Calvin first took on The Castle Inn the pub had no kitchen.  Undeterred, he invested in a pie warmer, which proved an instant hit.  This gave him the confidence to start a carvery initially using his domestic kitchen to cook the food.  Calvin pretty much ran a one man show, getting up early to clean the premises, cook the food and then serve behind the bar until late at night.
Today the pub has a new professional kitchen offering ‘home-cooked food’ at reasonable prices including a popular two meals for £10.  Calvin employs 25 staff including two full time chefs.  As for food, the pub caters for 130 regulars on most days as well as tourists.
Calvin said on hearing of his award: “I am thrilled to bits to have won this award.  It is has been hard work, but it’s worth every minute.
“When I first took on the pub, I think people thought because I was young I was going to turn the pub into a young person’s bar.  I didn’t.  I wore a shirt and tie behind the bar from day one, which I think surprised people in the town.
“I was taken under the wing by people in Skipton which has made me feel very much part of the community.  The Castle Inn has become the place to be in town with poker and quiz evenings,
Domino leagues and steak nights.  It is popular with older regulars and the younger generation.
Chris Moore, Trading Director of Star Pubs & Bars and one of the judges said of the Calvin’s success: “Though only 26, Calvin has bags of energy and a brilliant understanding of high standards, hosting a clean and welcoming environment to create a fantastic pub.
“Friendly, young and well-groomed staff look and act professional in their branded uniforms. Calvin has a strong vision for the future and is dedicated to developing his staff and working with them to offer customers a great experience.

“He is a fantastic publican and a well deserved winner of this award.  He’s definitely got what it takes.  He puts the great in the great British pub.”
Star Pubs & Bars has an estate of 1,343 pubs throughout the UK which it leases to independent business people to run as their own.  Find out more at www.starpubs.co.uk 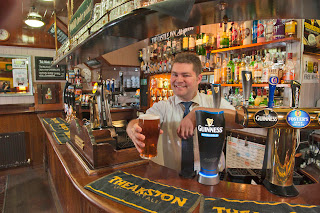