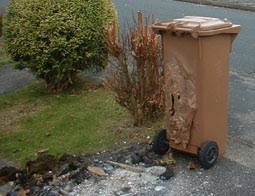 This was the scene after fire struck reycling bins put out on York Road, Brigg, ahead of this week's collection. Obviously the blaze did not start itself.
Bin fires like this are, unfortunately, fairly common. And dangerous. For they might easily spread to nearby fencing...or worse.
The new, modern plastic bins are much more hygienic than the old galvanised metal ones of years ago. But they don't stand up to fires in the same way.
Presumably those whose red, brown or green bins are 'torched' get replacements free of charge delivered by North Lincolnshire Council.
And talking of bins, within a few days of Brigg Blog highlighting the vandalised litter bin near The Monument last week, it was restored to its rightful place on the nearby lamp-standard.
We love a happy ending!
Posted by NIGEL FISHER at Wednesday, November 14, 2007