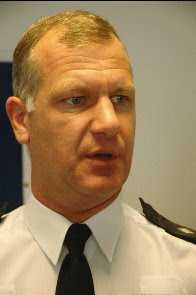 The main story on today’s Brigg Extra page in the Scunthorpe Telegraph relates to troublesome youths in the town centre. Here is the complete statement from Insp Brett Rutty (pictured), responding to calls from councillors, and members of the public, for action to be taken.

About 8.50pm on Friday, September 26 we received a call from the security staff at Tesco reporting a gentleman ‘aged about 60-ish’ was being ‘picked on’ by a group of youths who were pushing the man about.
Officers were quickly on the scene but the gentleman had gone. A group of teenagers were spoken to by officers and, about the same time (9pm) the police received a call from a resident of Brigg who reported he had been ‘assaulted’ by a group of youths at Tesco car park who had thrown ‘items’ at him.
The gentleman was clearly upset by the incident, though not injured, and stated he did not want a visit from the police. We assume this report relates to the same incident reported by Tesco Security. In the circumstances the teenagers were given strong words of advice and moved on.
In a separate incident, sometime later the same evening, a Neighbourhood Officer, as part of his routine patrol of the Cary Lane area, a location the Neighbourhood Officers and PCSOs continue to focus attention on, came across a small group of teenagers who were fooling around with the sign.
The officer detained the group, established no criminal offences had been committed and sent them on their way with some stern words of advice. The officer recovered the sign.
The gentleman subject of the first incident has previously reported being subject of confrontation and abuse by young people. The Neighbourhood Officer and PCSOs have been in touch with the gentleman to offer support, advice and reassurance.
On one occasion, in August, he was assaulted at Tesco car park. This matter was reported to the police and fully investigated. Witnesses were spoken to and a 16-year-old male was formally interviewed about the matter. A file was submitted to the CPS but it was decided, taking account of all the circumstances, there was insufficient evidence to prosecute.
At this time of year we do receive an increase in calls for service relating to anti-social behaviour and the actions of a minority of young people whose conduct can cause distress and annoyance to residents.
In recent years a particularly unpleasant act of the throwing of eggs and flour at buildings, vehicles and even people has been reported as we approach Halloween and Mischief Night.
I am writing to all local traders alerting them to this problem and seeking their co-operation in refusing sales of eggs and flour to young people around this period. We will be putting additional police patrols out on the streets to focus on ’ hot spot ’ locations and engage with young people who congregate together.
Parents have a part to play, too. I would urge parents to speak to their teenagers about the impact their behaviour can have on the rest of the community, especially the elderly and to do all they can to ensure their sons and daughters do not cause anti-social behaviour.
Posted by NIGEL FISHER at Tuesday, October 14, 2008