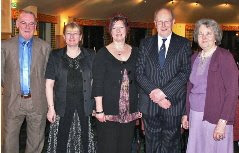 Former pupils of Brigg Grammar School, Brigg Girls’ High School and Sir John Nelthorpe School met at Elsham Golf Club for their annual dinner.
Eighty members, ranging in seniority from George Gurnell (87), who attended Brigg Grammar between 1932 and 1938, through to those currently at Brigg Sixth Form College, attended the event.
There was a very strong contingent from the 1960s and several members had made considerable efforts to return. Neville Miller flew in through blizzards and snowdrifts from the frozen wastes of the Arctic where he had been installing satellite equipment in temperatures of minus 40 degrees.
Others came from Spain, America and Croatia.
John Allcock (a pupil from 1958-1965), who now teaches at Sir John Nelthorpe School, spoke of his experiences as a grammar school pupil travelling into Brigg by bus six days a week, as that included Saturday morning school in the 1960s.
His speech was packed with of humour and everyone thoroughly enjoyed the occasion with a rare standing ovation when he sat down.
He reminded his contemporaries of the instruction by prefects as the bus crossed the bridge into Brigg – ‘caps on’ – and of the cottage industry which took full advantage of the various skills collected together on one bus, enabling homework to be completed during the journey.
He spoke warmly about the various characters among his contemporaries, many of them gathered at nearby tables to hear his recollections.
Football, cricket, swimming and athletics were high on the list of priorities and each held an amusing story or anecdote.
However, he reflected that through lack of local education authority investment the sports facilities have not been improved in 50 years and schools in Scunthorpe are demolishing facilities far better than those still in use at one of the leading schools in North Lincolnshire.
Sir John Nelthorpe School headteacher, Linda Hewlett-Parker, praised the performance of the present students and detailed their successes in the summer examinations 2007 where they were top of the North Lincolnshire league tables for subjects including maths and English.
Briggensians’ chairman, Jane Gibbons, thanked those who had worked so hard for the association during the past year and congratulated those who had gathered from many quarters of the globe to reunite with their old classmates and enjoy the opportunity to catch up on the life and achievements of their friends.
Secretary Barbara Kernon described it as a a very good evening..
"There was a table of 12 from John Allcock’s year and John was an excellent speaker – he kept everyone amused," she said.
The sixth formers did a super job running the raffle and photographs from the past were on display, giving guests plenty to talk about.
"People seemed reluctant to leave," she added.
Next year’s dinner date has been fixed as Saturday, March 21 at Elsham Golf Club.
For further information about the association, visit the website www.briggensians.net or email kernon@homecroft2002.freeserve.co.uk
Pictured here are (left to right): John Allcock (chief guest); Linda Hewlett-Parker (headteacher, Sir John Nelthorpe School); Jane Gibbons (chairman of the Briggensians); Roy O’Neill (chairman of governors), Barbara Kernon (Briggensians' secretary. A further picture from the annual dinner - also courtesy of Dave Brittain - appears on today's Brigg Extra page in the Scunthorpe Telegraph.
Posted by NIGEL FISHER at Tuesday, April 01, 2008