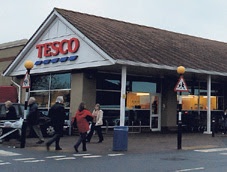 Archaeologists may be called in to study the site of Tesco’s proposed wind turbine at its Barnard Avenue store in Brigg – because of prehistoric remains in the area.
The retail giant is seeking planning permission from North Lincolnshire Council to install the turbine to provide ‘green’ power.
However, as part of the planning process, staff at North Lincolnshire Museum have been consulted, and safeguards are being suggested, with a condition attached to the granting of planning permission.
Alison Williams, of the sites and monument records office, says the proposed development will affect an area of known archaeological significance.
She explained: "In 1998, an archaeological excavation preceded the installation of the underground petrol tank situated close to the proposed location of this wind turbine.
"These excavations revealed evidence of Bronze Age activity, including large-scale woodworking debris that may have been associated with boat-building, and is very close to the find spot of the Brigg logboat of the same date.
"This material was found well-preserved in the waterlogged alluvial soils at a depth of less than two metres below the ground surface.
"The concrete foundations for the proposed wind turbine are stated to have a notional depth of two metres and will thus impact on the known archaeological horizon."
She suggests Tesco should take appropriate measures to ensure any archaeological deposits are identified, assessed and safeguarded in advance of the determination of the planning application.
Given the relatively small scale of the proposal, she says there are no reasons for objecting to the application on archaeological grounds.
"However, it is important that an appropriate archaeological mitigation strategy is implemented to ensure the preservation of any important archaeological remains that might be disturbed," she stresses.
"The strategy should allow for the systematic archaeological excavation of the foundations, followed by post-excavation analysis and publication of results.
"A suitably qualified archaeological contractor should undertake this work, in accordance with an agreed scheme of work."
We'll let you know when the planning application has been decided...and whether the condition suggested on archaeological grounds is imposed.
Posted by NIGEL FISHER at Friday, February 08, 2008