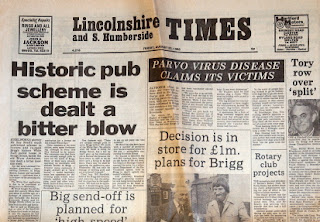 Today, breaking stories in Brigg can be uploaded to http://www.thisisbrigg.co.uk/ within a couple of minutes.
That's a far cry from the way things used to be got ready for publication on the old Lincolnshire and South Humberside Times weekly paper, whose editorial offices were at 57 Wrawby Street, Brigg.
In the days before computers came in, reporters banged out their copy using two fingers on typewriters, and the stories and prints (pictures) were put in a packet to be sent to the Hull Daily Mail works in the city for typesetting and printing on the glorious old press.
By 1980 the system of getting the copy to Hull in the evening involved driving to Barnetby and leaving the packet in a wooden box, outside the booking office.
Next morning the porter, Reg, would unlock the box, taken out the parcel and put it on a train heading for Grimsby. It would be taken off at Habrough and handed to the guard of the next train heading from Cleethorpes along the Barton branch.
At New Holland Pier station the packet would be taken off the train and passed on to a responsible member of staff on the Humber Ferry, who would hand it in at the jetty in Hull.
Meanwhile, the 'copy boy' - lowest-ranking person in the editorial department on the Hull Daily Mail - would be sent from Jameson Street HQ on a short walk to the ferry terminal to collect the packet.
Compare that with today's lighting fast communication systems, And remember, the old Lincs Times - loved and cherish as it was until its demise in 1985 - published only once a week.
These days, one of my most popular anecdotes about old days on the Lincs Times refers to the infamous Wednesday when a young reporter (not me!) was sent by car from Brigg with urgent news to be taken direct to New Holland.
He was running late, and on arrival at the end of the Pier saw the ferry moving off. "Throw it, mate!" instructed the ferryman. The reporter did so but a gust of wind got hold of the precious copy packet and it started floating its way down river.
Carbon copies were always kept of stories....just in case.
But having to dictate everything over the phone to copy-typists in Hull was a very slow business indeed.
If you want to read a little more about life on the Lincs Times, visit
www.holdthefrontpage.co.uk/bygones/2005/08aug/050824linc.shtml
Posted by NIGEL FISHER at Tuesday, October 16, 2007